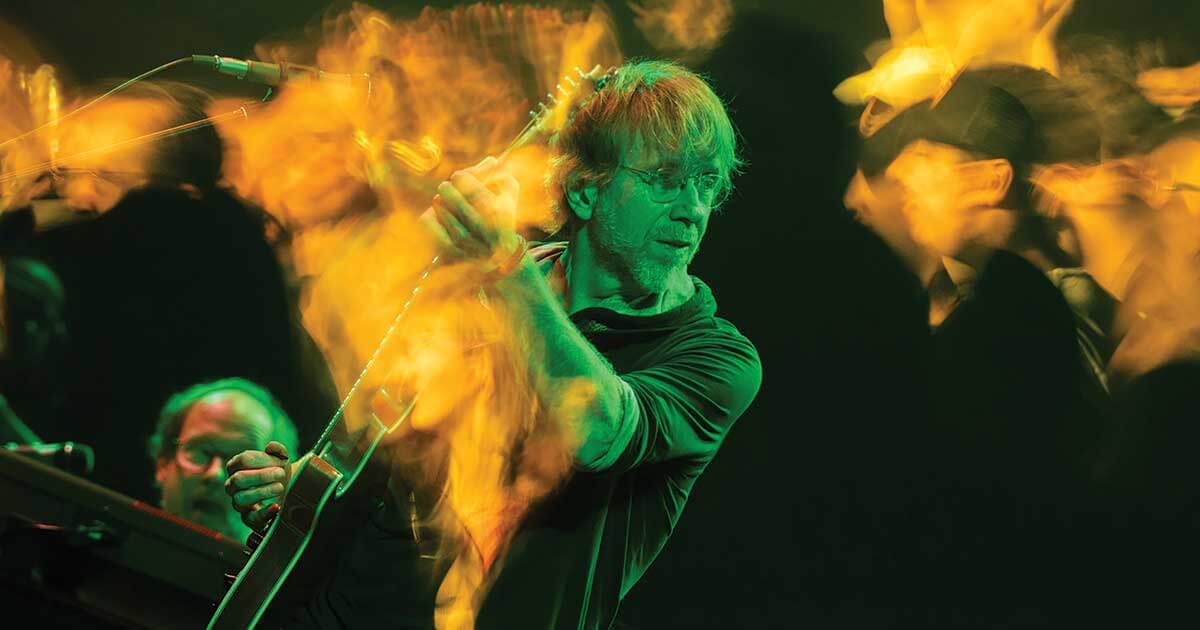 This article originally appeared in StreamingMedia.com

Every time the legendary band Phish plays on Halloween, fans know they’re in for a surprise: Since 1994, the band has devoted the second of its three sets to a “musical costume.” It’s not something they wear, but something they play—a cover of a classic album, like David Bowie’s The Rise and Fall of Ziggy Stardust and the Spiders from Mars, Talking Heads’ Remain in Light, even Walt Disney Records’ Chilling, Thrilling Sounds of the Haunted House. In the weeks leading up to the show, the band’s most ardent fans devote no small amount of time to guessing what that year’s musical costume will be. The smart money in 2018 was on Jimi Hendrix’s Electric Ladyland, to celebrate that album’s 50th anniversary, or something by Tom Petty, who’d passed away since the last Phish Halloween show.

It’s not just ticketholders who can get in on the fun. Since 2002, Phish has been making audio downloads of all its shows available on Nugs.net within days of the concerts. In 2010, Phish delivered its first live pay-per-view stream of its New Year’ Eve concert at Madison Square Garden, and soon started live streaming most of its concerts on LivePhish.com, and in the last few years via the LivePhish app for iPhone, Android, and a variety of set-top boxes and smart TVs. But in 2018, Phish gave its fans another surprise on Halloween: It would deliver the show—and the three that followed in the band’s 4-night stand at the MGM Grand Garden Arena in Las Vegas—in 4K as well as the usual HD.

It wasn’t just the first 4K live stream for Phish. Believe it or not, it was the first 4K live stream of any major concert. What follows is the story of how it came together and how the band pulled it off with the help of its technology, creative, and business partners: video crew 201 Productions; software-as-a-service streaming platform MobileRider Networks, live streaming and download service Nugs.net, and content delivery network Akamai Technologies.

So what was the 2018 musical costume, anyway? Rather than cover an actual album, Phish invented a fake 1980s Scandinavian prog rock band it called Kasvot Växt and an album called í rokk. It went so far as to hand out a program in Las Vegas featuring a history of Kasvot Växt and to plant stories in the music press—it even got well-known critic Stephen Thomas Erlewine to write a biography and album review for AllMusic. A funky, synth-heavy departure from the band’s usual guitar-centric sound, Phish’s second set was perhaps the biggest surprise they’d ever given their fans. The band, the stage, and the instruments were all in white, and guitarist Trey Anastasio and bassist Mike Gordon even broke out some choreographed dance moves.

Phish’s commitment to video starts long before a live stream ever reaches a LivePhish customer, and the band and its video crew take it one step further than most artists. While almost all arena and stadium acts feature image magnification (IMAG) screens so fans in the back of the venue can get to see close-ups, Phish foregoes the in-house video entirely—they want the fans’ eyes on them and each other, not screens—but instead they have a dedicated video team that shoots everything for broadcast and for the band’s archives. 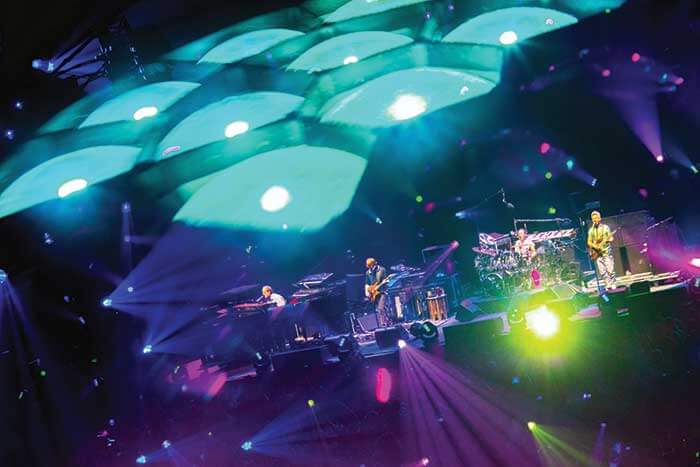 Phish’s concerts balance precision and improvisation, and they sought the same for their video productions. “The goal is to maintain a consistent quality level night to night while still keeping it fresh,” says band manager Jason Colton of Red Light Management. (Photo credit: Rene Heumer)

“We’ve been working with our director Eli Tishberg for a long time, and he’s absorbed a lot of feedback from the band over the years as well as from fans,” says Jason Colton of Red Light Management, Phish’s management company. “The goal is to maintain a consistent quality level night to night while still keeping it fresh.”

Video producer Trey Kerr has been on tour with everyone from Florida Georgia Line to Drake, but he and his 201 Productions staff have been Phish’s touring video crew for years. “The great thing that Phish does is that every single show is completely different,” Kerr says. “That keeps it fresh and interesting to do all the time. There’s not even set lists, so we don’t know what they’re going to play. We just kind of go into it and go ‘All right, let’s see what happens’.”

And because they’re not shooting for IMAG, they can get more creative than the traditional in-house concert video crew. “It’s not just the guys’ faces, it’s not the pretty headshot or the lead singer,” Kerr says “We get wide shots of the lights, the buildings we’re in, the people in the crowd. People at home love that, because they’re seeing the entire environment.”

For most Phish shows, Kerr directs a six-person crew, sometimes with the help of a second director. Kerr also acts as engineer, but he says that all of his camera operators have engineering backgrounds. As for the cameras, the crew has one camera on stage, one in the pit in front of the stage, and a shooter high in the venue with an extra-long lens. On top of that, they have five robot cameras controlled by a single operator, four on stage and one that Kerr says he finds “somewhere interesting” to put at every show. Finally, they have five POV cameras for close-ups of things like keyboardist Page McConnell’s fingers and drummer Jon Fishman’s kit.

And they shoot it all in 4K, even though last year’s Las Vegas shows represented the first time they delivered in 4K. “Phish wanted to go 4K [in 2018], and I built a 4K rig that is mobile enough that we can strike it, set it up, and tear it down every single day,” Kerr says. “Essentially, all we do with MobileRider is that we give them a pipe and they take it and do what they need to do with it for broadcast and webcast purposes.” 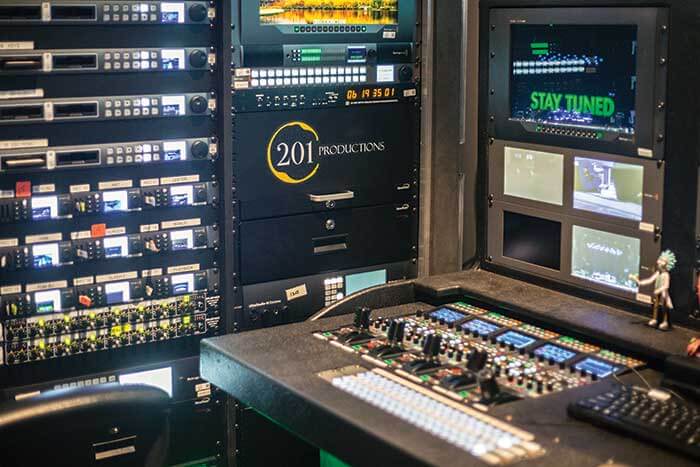 201 Productions president Trey Kerr built a 4K rig for shooting Phish that he says is “mobile enough that we can strike it, set it up, and tear it down every single day.” (Photo credit: Rene Heumer)

For the Halloween show, Kerr and his crew had the added challenge of working with Phish to make sure their equipment was invisible against the all-white stage. Kerr couldn’t talk about exactly what they had to do differently, but there was plenty of white-wrapped cable visible when I spoke to him backstage before the second night of the Vegas run.

MobileRider Networks is a Salt Lake City-based company that provides software-as-a-service platforms for streaming live video, working with heavy hitters such as Facebook, Live Nation, NASA, U2, and the Grammy Awards. They were responsible for getting the video signal from the MGM Grand Garden Arena to Akamai for delivery to LivePhish customers, and the first 4K webcast posed some unique challenges.

“The MGM’s network was unproven and not configured correctly with independent network carriers to be able to run both primary and backup feeds directly out of the venue,” said MobileRider CEO Mark Frederick in an email. “Since 4K had not been tested via IP from the venue, we brought in a 4K satellite truck to run as primary line with uplink and downlink at our Salt Lake City NOC [network operations center].”

On-site, 201 Productions delivered its quad 4K signal to MobileRider’s AWS Elemental Live L700 encoder, then to an AJA 12GM distribution amplifier that delivered the primary feed to the satellite truck, Frederick says. The satellite truck took used Ericsson AVP 4000 4K UHD encoders to encode to broadcast TV 4K format, and then that signal was beamed up to the EchoStar 105 in a 16 MHz slot and pulled down to the Salt Lake NOC using an Ericsson MediaFirst Content Processing Decoder.

“That feed was then ingested into an Elemental Live L700 encoder to encode a full array of 4K HLS bitrates into the Akamai MSL 4 [network],” Frederick says. Akamai dedicated staff in its Broadcast Operations Control Center (BOCC) to monitor the delivery to LivePhish customers.

Halloween marked the first time the BOCC handled a Phish webcast; since it was the inaugural 4K show, the team at Nugs.net decided to bring in the extra help and monitoring. “The BOCC also brings a lot of pre-planning as well,” says Nugs.net CEO Brad Serling. “We’ve been in every ballpark, every football stadium, every sports arena, every theater, and it’s a crapshoot every time,” Serling says. “Even if it was great when you were there three months ago, you come back and somebody changed something, or somebody else is on the IT shift that night. You can plan until the cows come home, but at the end of the day, when you’re in the trenches and stuff’s not working, it’s good to have those guys [in the BOCC] who have that knowledge.”